The Watch Mainspring Deconstructed And Analyzed 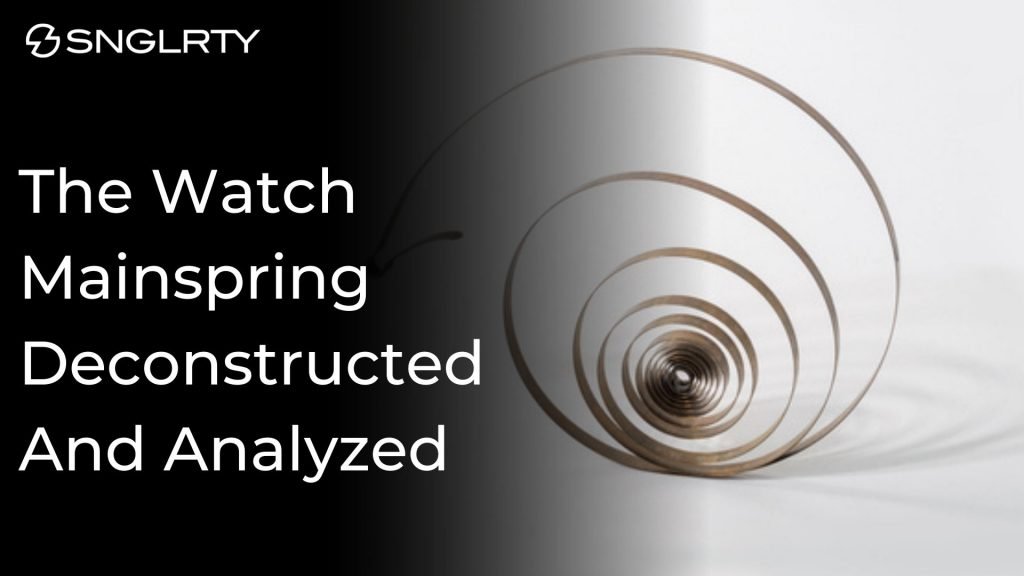 Watch Mainspring – The Energy Of The Mechanical Watch Movement

The watch mainspring is just a humble spring. There are many springs in a mechanical watch so understanding their different functions is essential for the enthusiast.  The whole timekeeping movement that drives all the display and other complications start and ends with a spring.  At the beginning of the gear chain is the mainspring in its barrel that supplies the energy, and at the other end is the hairspring that regulates the crucial balance wheel and escapement. There are also a few in the middle, but they are not so critical.

The Spring Is Steel

On my tour through the details of steels, mainly for making watch cases, I took a slight detour to look at how steel can be manipulated to produce the all-important spring characteristic.  This time I am going to look at the physics behind the mainspring. What are the physical laws we can use to model the properties of the mainspring? Then, most importantly, I will look at how the spring energy reserve is implemented in practice because theory and practice are always very different.

All springs, and to be more accurate, elastic bodies, are modeled using Hooke’s Law.  This law is named after the British physicist Robert Hooke.  He published it in 1676 as a Latin anagram, “ut tensio, sic vis” or in English “as the extension, so the force.” In 1678 he stated the law formally. Hooke’s law states that the extension of an elastic body is proportional to the force applied to it.  Intriguingly, Hooke noted in 1678 that he had been aware of this law since 1660.

Let’s Break It Down

To put this into more understandable language, imagine a simple extension spring. If I apply 1 unit of force to the spring, it will extend by a fixed amount, let’s say one unit of distance.  Then, applying two units of force to the same spring will extend two units of distance. The ratio between the force and the distance means that if the force is known for any given spring, the extension can be predicted, and vice versa. This principle is used in calibrating spring scales; the indicator moves a given distance for a given mass.

Now We Have An Equation

Putting this mathematically, we have a simple equation

The relationship between force and extension can be represented graphically and results in a  sloping line graph similar to the below.  Force is on the vertical axis, and extension is on the horizontal axis.  The gradient of the line is the elastic coefficient and is constant. 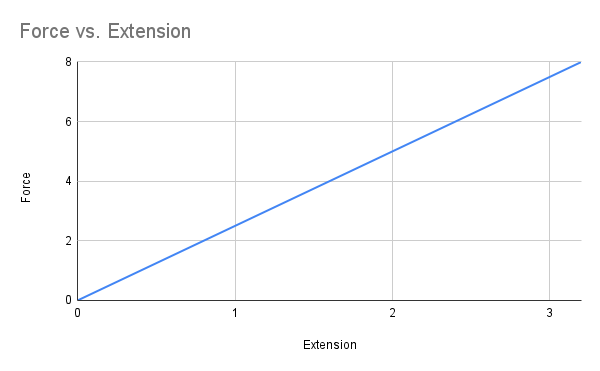 The graph makes everything look nice and simple. Alas, to make this work in a watch, things become a little more complex. There are two complications that we have to overcome to make the theory applicable to watches.  The first is that springs in watches are not extension springs; they are coil springs. The second issue is that Hooke’s law is only an approximation of what happens in real life.

But The Barrel Moves Round In A Circle

The graph above depicts the situation where a direct or linear force is applied to a linear extension spring, but a torsional force or torque is necessary in the mainspring of a watch. The equation needs to be adjusted to reflect this situation as follows: 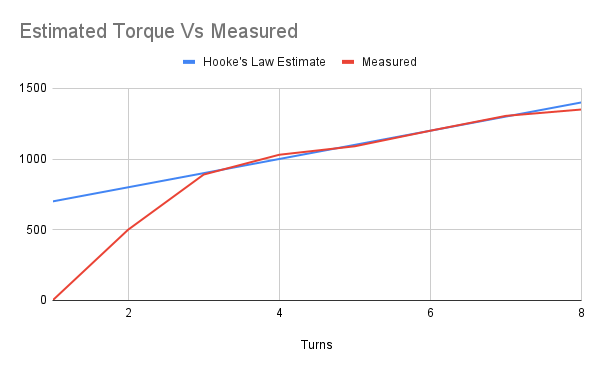 Hooke’s law does not apply at the initial phase of loading the spring.  A watch mainspring requires two to three turns to put it within its operating range. Equally, once the load exceeds the elastic limit of the material the spring is made from, it will start to deform. In the example above, plastic deformation starts after 7.5 turns of the mainspring. What is happening in these areas?

When loading of the spring commences, the spring will extend further than expected for small forces, or in the case of a coil spring, it will coil further with the application of torque. But once in the operating range, the torque increases linearly for each rotation of the spring. If the mainspring were allowed to work outside the lower bound of the operating range, there would not be sufficient power transferred into the movement, resulting in the watch running slowly.

The problems associated with reducing torque as a coil spring unwinds have been understood for centuries. Several solutions have been used over the years. My favorites is the English Fussee (see page 210 of Rudimentary Treatise of Watches, Clocks & Bells).  Thankfully, there is a much more elegant solution to ensure a minimum torque from the mainspring with today’s modern springs.

Material Limitations Of The Mainspring

For modern watches, it is not possible to overwind the mainspring. The release mechanism for the mainspring to prevent overwinding is rather ingenious.  Instead of the mainspring being attached directly to the barrel, it is connected to a bridle, which is also a spring.

How Overwinding The Mainspring Is Prevented

Sufficient Power From The Mainspring

This is how the modern automatic watch avoids overwinding, but then there is also the problem at the other end of the working range. The desire is to have sufficient torque applied to the gear train at all times. This is a much simpler problem to solve – the spring is installed into the barrel partially wound.  A combination of the partially wound spring and the bridle ensures that the mainspring operates only through the operating range of the spring, therefore consistently delivering a constant torque to the gear train.

It Is All About The Energy In The Spring

The final piece of the mainspring puzzle is to ensure the movement has sufficient reserve in the spring.  There is little point in having a mainspring that will keep your watch active for only a few hours.  Typically a modern automatic movement will have a power reserve in the region of 40 hours.  There are many contributing factors to this final number, but one of the most important is the total energy stored in the mainspring.  How can this be calculated?

The energy expended in moving a mass in a linear motion equals its force times the distance moved.  From a more practical perspective, if 1 Newton of force is applied to a mass that moves 1 meter, then 1 joule of energy has been expended.

For torque, things are even more straightforward. The reason for this would require some material mathematics, and I am trying desperately to avoid that here. If you would like to see it, please let me know in the comments below, and I will post it in another blog. For simplicity, I will merely state that the energy the barrel will release is:

The mainspring for an ETA 2824-2 is, for example, a 1300 g·mm (gram · millimeter) spring. This measurement is not a force, but it can be changed to a measurement of force by multiplying by the acceleration of gravity. For simplicity, we will assume gravity to be 10ms-2. Most mainsprings are identified by the maximum torque they can sustain (and thus the torque the bridle needs to be tuned to).  The mainspring goes through approximately five turns, starting from  800 g-mm to the maximum of 1300 g-mm.   A simple bit of maths gives us the energy stored in the mainspring of

This is a tiny amount of energy when considered in relation to other energy sources we use these days, but with a well-designed gear train, this is enough energy to keep your watch moving for 40 hours or more.

The Other Important Spring

Next time, I will look into the other end of the gear train, at the balance wheel and hairspring.  This is ultimately where the energy from the mainspring is utilized.  In that blog post, I warn you now; there will be quite a bit of mathematics!

Please do let us know what you think of our pieces, we do enjoy the feedback and will use it to make our blogging more interesting and, we hope, more relevant to all our followers.

Read More →
PrevPreviousThe Date Complication – An Unnecessary Yet Expensive Function?
NextWe All Want To Be Good Stewards Of The EnvironmentNext