Daniel and Steve had been struggling to come up with ideas for a watch for a while. It was too simple to ‘seek inspiration’ from classic watches, they had set their sights much higher.  Their watch had to be different.

It was not just a watch, they were on a path striving to realize their dream – a new life, a new business and perhaps a little legacy in the watch industry. The moment of epiphany was in a non-descript bar in Hong Kong but the story really started a few years prior.

Creating a watch of their own was a regular topic of conversation for Steve & Daniel. Daniel had over 30 years of experience in the watch industry and had developed well over 100 watch ranges. He was willing to get started with the design process, but Steve was not content with following the mainstream with just a tweak here or a different color there. The watch that they put their name to had to be uncompromising.  They were not going to be content, creating just another common wristwatch defined by sameness. It had to be something innovative, a maverick in the marketplace, a watch they both could be proud of.

That was a tall order because it seemed that everything Daniel & Steve thought of had already been done before.

A STRUGGLE WITH COMMON

A GLASS OF WINE

Both were spending an inordinate amount of time on what seemed an impossible task. Why should Daniel & Steve think they could create a trailblazing watch – absolutely no reason. Months passed, and there was absolutely no progress. Steve began questioning their effort, but Daniel, on the other hand, remained determined. He had recently become a student of mindfulness and self-motivation, and nothing was going to stop him.

There was only one thing to do; Steve and Daniel decided a drink was in order. Red wine was consumed, and, as usual, the subject turned to watches. Daniel was educating Steve on the intricate workings of movements when Steve harkened back to his engineering degree and broke the concepts down to an energy supply; an engine, and a gear box.

“What if we put a reverse gear into the watch like in a car?” Next, a beer mat was being pressed into service as a doodle pad.

In that simple, random tangential thought lay the solution for the pioneering challenge Daniel & Steve had set themselves. If the minutes moved backward (counterclockwise) and the hours forwards (clockwise), then time would always be converging at a single point.

Daniel initially struggled to follow Steve’s scrawls on the beer mat. “It is a bit like a digital display on an analog timepiece – but rotating in its location” was the best explanation Steve could manage at that moment. Before either was really aware, the bold and original solution to their quest was scrawled on a beer mat – or was it?

Everything had seemed so simple and clear the previous evening, but in the cold light of day, it was time for Daniel and Steve to confirm their gut reaction. Had they created a simple and visionary watch concept? 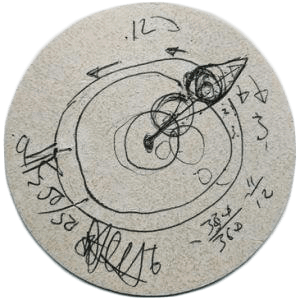 After a few weeks of research, neither could find anything like their idea in the market or even reference in books or literature. Daniel began to reach out to some of his trusted contacts. These Swiss watch specialists, developers, and researchers always had the same initial reaction, “Nice, but that must exist.” Without exception, after pulling out a few books and doing a bit of head-scratching, the response was, “Actually no, nobody ever made it.”

Steve & Daniel started to believe they had found their watch, something that would live up to their objectives – unique, bold, and individual.  They christened the project Ohi – One Hand Indication.

Simplifying the display of time by using a single hour hand and then rotating the minutes counter-clockwise so that time converges at a single point meant they had invented the first single-handed watch to display time accurately to the minute.

As the pair became more confident in their breakthrough, Daniel turned his attention to how this innovative time display could be implemented. Steve set about protecting their pioneering time display by engaging a patent attorney.

Daniel knew the only place to realize this new complication with uncompromising quality was Switzerland. He reached out to his network of friends and former colleagues for assistance. In collaboration with movement engineers, the detailed construction design of the movement was achieved.

The next step was the watch design, and then prototype pieces, twenty to be exact, were created to validate all the hard work.

The prototypes were complete, and they were all keeping time perfectly. Work was continuing to refine the design. Then a letter was received from the United States Patent and Trademark Office (USPTO). Rejected.

But the patent attorney Steve & Daniel were working with was not convinced.

The pair knew life has its ups and downs. This new challenge they faced was, in their eyes, reflected in their presentation of time. Minutes going backward, hours resolutely moving forwards yet time converging at a single point – just as life has its ups and downs. It moves forwards and backward, but it is always happening now, in this instant, and that is where we should all focus.

Daniel & Steve were very frustrated. Was all their work going to be for nothing?

The pair realized that there was only one thing to do – deal with the issue.

They worked tirelessly with the patent attorney to craft a defense against the rejection.  Revisiting every aspect of their vision and refining their arguments against the objection the patent examiner had raised.

It was a day of excitement and apprehension when their rebuttal was summitted, but after several tense months, the USPTO wrote back.

With this success, it was time to name this new presentation of time.  Time distilled to a single point needed a name distilled to its core.  A singular point of time, a singularity, but who needs vowels? It was “SNGLRTY.”

With SNGLRTY, Steve and Daniel hope to be a small footnote on the history of wristwatches, but more significantly bring perspective to time for those who own one of their iconic watches encouraging people to #seetimedifferently.

After struggling for years to come up with their new take on „time“ Daniel & Steve worked tirelessly to bring it all to fruition, and after 3 years of research, prototypes lawyers and a number of set backs SNGLRTY was launched.  With a new look to time, we need a new way to buy it – you will never buy a watch like this again