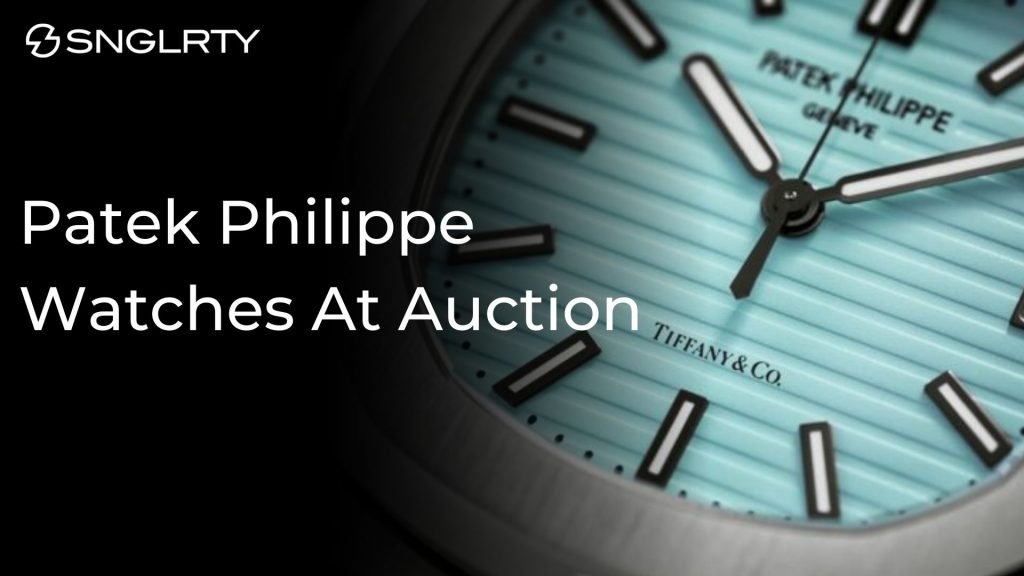 What an incredible way to bookend the year for the SNGLRTY blog.  We started this year by looking at the number of iconic watches auctioned in December 2020 and marveling at the prices they achieved. In particular, the jaw-dropping US$5,475,000 that was paid for a Paul Newman Rolex Daytona. I wondered privately if we had reached a pinnacle in the price of watches at auction, and that question was answered with an emphatic NO from the market.

Two watch auctions and two watches have moved the prices at auction into another league.  These watches come from Patek Philippe, from very different eras, but there is a common theme for all these watches that continue to hit eye-watering hammer prices.

It Is About Teamwork To Create The Story

The first to catch my eye was a new release from Patek Philippe, and this was a  limited release of the Nautilus 5711/1A watch.  As any follower of outrageously expensive watches knows, Patek Philippe announced to the market in February 2021 that they will discontinue the Nautilus.  Well, clearly, there will be exceptions to this for special occasions.

This release of a Nautilus watch was to celebrate the 170th anniversary of the collaboration between Patek Phillipe and Tiffany, now owned by LVMH.  As it is the 170th anniversary, this is a limited release of 170 pieces of this watch.  This particular 5711/1A has a long list of defining features, including a Tiffany blue dial embossed in the usual horizontal style. The baton hour markers, the baton hour, and minute hands are all made from blackened white gold with what I would speculate is a Swiss Super-LumiNova luminous application. Its standard (well for a Nautilus) 40mm case houses the automatic 26-330SC movement, presented through a sapphire crystal case back inscribed with “170th Anniversary 1851-2021 Tiffany & Co. – Patek Philippe “.

If That Were Not Enough

The story has one twist more, though.  The watch put up for auction is the first of this series ever sold.  And what a sale it was.  With a guide price of “bids over US$50,000” and no reserve on it, the final price, including the buyer’s premium, was US$6,503,500.  Thankfully all that money is not going to Tiffany & Co but donated to The Nature Conservancy. Founded in the U.S. in 1951, The Nature Conservancy is a global environmental nonprofit organization working to create a world where people and nature can thrive.

Mother Of All Auction Premiums

This price tag is even more remarkable when you realize the list price is $52,635. The challenge is that there are only 169 pieces now available for sale from Tiffany boutiques in New York, Beverly Hills, and San Francisco. I feel sorry for the Tiffany executive responsible for telling the thousands of buyers who want one of these watches that they cannot have one.  I think this could be a situation where Patek Phillipe and Tiffany have shot themselves in the foot by upsetting a large proportion of their critical customers by being too exclusive! Let’s see.

Another Boundary Broken In Watch Auction

Days later, there was another eye-watering auction of a Patek Philippe watch.  This time the location for this was Hong Kong, and this one was a clear statement of intent from the market.

It was a 73-year-old watch initially sold to Prince Tewfik Adil Toussoun of Egypt on 20 July 1951. The hammer came down on this 1948 Patek Philippe reference 1518 pink gold perpetual calendar chronograph wristwatch with moon phases at the eye-watering price of $9,570,900.

A Rare And Historical Reference

Patek Philippe launched this line of perpetual calendar chronographs during World War II at the Swiss Watch Fair in Basel in 1941. There were 281 of these reference 1518 watches cased up at the time with only 58 pieces, it is believed, cased up in pink gold and the balance in yellow gold.

Making this watch even more interesting is that a pink gold reference with a pink dial is even more sought after as there are only 14 known to exist, including the one sold.

The reference 1518 was not only Patek Philippe’s first serially produced perpetual calendar chronograph wristwatch, but the first of its kind from any brand, earning the reference its well-deserved place in horological history and setting the standard of Haute horology for the decades to come.

This specific watch reached these unimaginable heights of bidding because of its provenance and its flawless condition.  The watch was consigned by a relative of the Prince and has spent the vast majority of its life in a safety deposit box.  It has never been polished, so its hallmarks and original brushing remain visible.  I imagine this watch will be making a quick trip straight back to a safety deposit box!

The watch came with its original Certificate of Origin, Operating Instructions, and its box, all new.  Basically, it is a new watch that has passed through a time machine.

What Does It All Mean?

So what can we make of all this?  When I looked at some of the auctions in January, they were linked by a common theme. I ended that piece with the observation that, “The story is everything, especially when the auction room is filled with watches.” I believe these auctions reinforce this point.

For me, the interesting aspect of these watches is understanding where each watch is in its story arc.  When we discuss the Tiffany Nautilus, these are brand new watches with a story behind them that dates back 170 years and an incredible launch.  But where will these be seen in the fullness of time?  Will it just be a curious quirk of the market in a strange time for people to look back on (a tulip bulb, anyone?), or will it be a remarkable piece that was the full stop at the end of the road for the Nautilus watch?  Did you notice that Jay-Z was sporting his Tiffany blue Nautilus around town?  In 50 years, will my son be writing about that watch, what Jay-Z did with it and what number it fetched at auction? Will Jay-Z and the Tiffany Nautilus be the equivalent of the Steve McQueen and the Heuer Monaco?  We will have to wait a while to find out.

As for the reference 1518, it was Patek Philippe’s first serially produced perpetual calendar chronograph wristwatch.  If that were not sufficient, it was also the first of its kind from any brand, earning these watches their well-deserved place in horological history and setting the standard of Haute horology for the decades to come.  Its story is well in place, and whatever comes down the path, I believe this watch will continue to be revered in the future.

As for the watch market as a whole, if it continues at this rate, Picasso will have to move over. The micro-mechanical marvels are coming through to take on the art world!  Well, not just yet, but perhaps next year?

Read More →
PrevPreviousIsochronous, What Does Mean For A Watch Movement?
NextTime – The Key To Navigation On Planet EarthNext