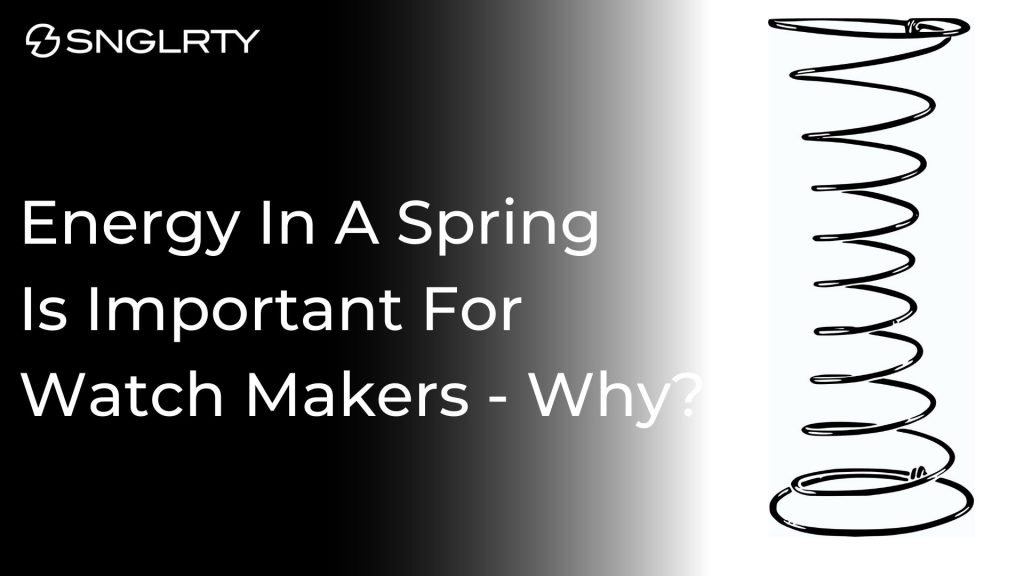 Energy in the balance spring and the balance wheel creates the oscillations that is the beat of the mechanical watch. These beats or oscillations are what make measuring time accurately with a mechanical movement possible.  We have spent a few blog posts understanding different aspects of the mechanics of the balance wheel, and the history of how this wonderful oscillator came about.  This week the focus is on the balance spring.  It will draw on a good amount of the previous blog posts, in particular the first blog that looks at how we describe rotational movement mathematically.

The theory that allowed the physical properties of a spring to be modeled was first published by a gentleman called Robert Hooke in 1657.  He was an English physicist who was also closely involved in the development of the watch escapement. The debate continues today whether it was Robert Hooke or Christian Huygens who developed the modern escapement, but we can leave that debate for another day.

The work of Robert Hooke is well known by all schoolboy physicists and states that the force that is required to extend a spring is proportional to the extension of the spring.  Or to put that mathematically:

Where F is the force, x is the extension or displacement of the spring and k is a constant for a given spring called the modulus of elasticity.

This is a simple concept to understand in the linear world.  If the spring needs 4 Newtons of force to extend the spring by 1cm then to extend it by 2cm it will take 8 Newtons of force. The challenge now is to put this into the world of rotation, instead of force we are talking about torque.

Thankfully this is made a lot easier by all the work we have done previously on expressing angles in Radians rather than degrees.  So if a torsion spring, which is another name for a balance spring, is rotated through an angle (in radians) then the torque required for a given rotation is, under Hooke’s law, a constant.

Laying that out mathematically:

Where T is the torque, A is the modulus of elasticity for rotation, and Θ is the angle through which the spring has been displaced expressed in radians.

That is all very nice but the key is to work out how to model the movement of the balance wheel and the balance spring together.  In order to do this, we need to be able to understand the energy the spring holds at various points as it is displaced.

Let’s consider the spring at the point of maximum displacement.  At this point, the resistive force from the spring is equal to the displacement force acting on the spring. This means that energy has been transferred into the spring.

Let’s go back to answering this question for a linear helical spring, and then we can convert it for a torsional spring.

Things become more simple when in a graph, well I think so at least.  Plotting the movement of the spring on a graph is very simple.  The gradient of the line is the modulus of elasticity and the distance displaced is k, this means that the force applied is kx.  In the example below k=0.3 Newtons per cm (Ncm-1) 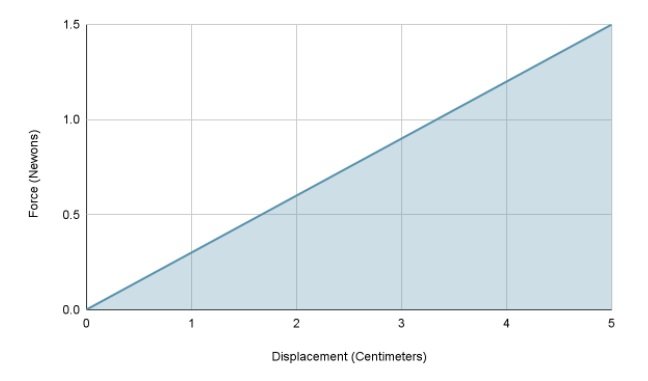 From definition 1 Joule of energy is expended when a force of 1 Newton is moved through 1 Meter. From this we can simplify that the energy expended by force times displacement.

The simplest way to calculate the energy in a spring is to understand that the energy accumulated in the spring is equivalent to the area under the line in the above chart (colored blue).  This can be calculated quite easily:

For a displacement x the force applied is equal to kx

Calculating the area under the line is therefore

Those who prefer a more rigorous derivation of this consider the following:

The energy required to move the spring from x to x+dx where dx is vanishingly small.

As the movement of dx tend to zero this becomes

A quick bit of integration gives us the answer of:

This is only useful to us watch fanatics is we can understand it in terms of torsion.  Thankfully this is simple. If force is exchanged for torque, and displacement is changed angular displacement the graph will look something like the following because Hookes law still applies. 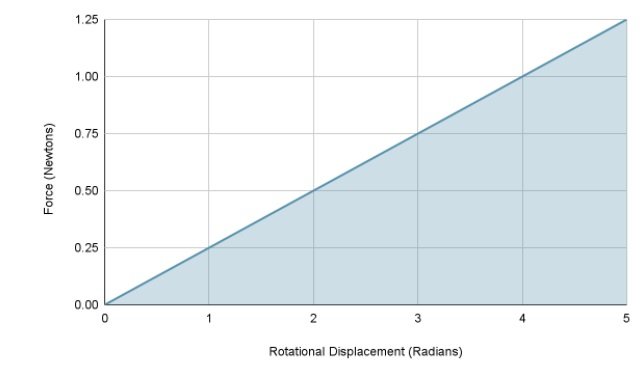 Where A is the modulus of elasticity fo rthe spring and Θ is the angle through which the spring has been displaced expressed in radians.

The point to note is that the solution to both the linear equation and the torsional equation will both be in Joules, but the variables and the constant in the equation will have different dimensions.

What do I mean by “dimensions?”  Think of it this way, for a regular linear helical spring the modulus of elasticity will be in the units of Newtons per centimeter or Ncm-1 in shorthand.  For a torsion spring, it will be expressed as Newton centimeters per radian or NcmRad-1 in shorthand.  It is always a good idea to ensure that you keep track of the dimensionality of any equation, it is the first check to verify it could possibly be correct.

Our goal will be to balance the energy between the balance wheel and the balance spring so that the whole system oscillates at its resonant frequency (isochronism).

This is the point of peak performance for the escapement.

Do please let us know what you think of these blogs?  Are they intersting to you?  Or would you prefer to hear more on other subjects?  We do enjoy all your feedback.