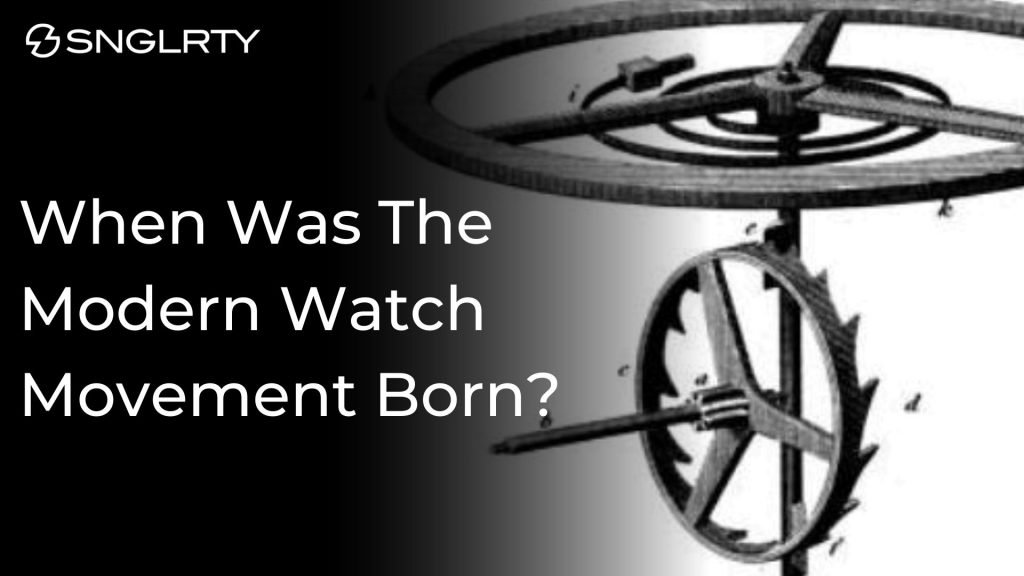 The Technology of Measuring Time

Over the last few months, I have been diving into the details of the watch mechanism.  My objective is to deconstruct the watch mechanism and see how we would start to design it from first principles. Some have said I started at an extraordinary place, looking at defining rotating bodies mathematically and then looking at isochronism.  The simple reason is that everything in a watch rotates.

There Is A First Time For Everything

There is no watch without the balance wheel so starting our design, or at least the understanding of our design, at the balance wheel seems appropriate.  As we move through this process, it may be apparent that this was the wrong place to start; this is the first time I have done this too!  If any professional watch movement designers are out there and they have any thoughts, I am definitely keen to hear some feedback.

Back To The Beginning

The verge escapement, or crown wheel escapement, created the first known clocking mechanism that did not rely on gravity, sunlight, or water. It is unknown who invented the verge escapement, but it was first used in the late 13th century and continued in use until the mid 19th century in both clocks and pocket watches.  The name verge comes from the Latin virga, meaning stick or rod.

In most descriptions, and my bible for this is the Rudimentary Treatise from Edmund Beckett (download your copy HERE for FREE), the vertical escapement drives a primitive type of balance wheel called a foliot. This is the forefather of the balance wheel, and its evolution started from here.

There Is No Balance Wheel Without An Escapement

The vertical escapement was not particularly accurate because the foliot was just a simple inertia balance.  Two weights are hung at either end of the foliot that is attached to the verge in a “T” orientation. This would rotate and interact with the crown wheel through pallets on the verge or arbor.  Initially, this was very rudimentary, operating merely through inertia and did not keep time well. Some clocks could be more than 2 hours wrong by the end of the day!  Soon a spring was attached to the foliot, which was the start of the development of the balance wheel.  If you are interested in more details, you can find more starting from Page 224.

The foliot is a horizontal bar with weights near its ends affixed to a vertical bar called the verge, which was suspended free to rotate. The verge escapement caused the foliot to oscillate back and forth about its vertical axis. The rate of the clock could be adjusted by moving the weights in or out on the foliot.  But ultimately, it was just inertia that would regulate the oscillation rate, which could vary wildly throughout the day and thus be very inaccurate over relatively short periods of time.

It Started A Long Time Ago

Early verge movements include a clock at Dunstable Priory in Bedfordshire, England, built in 1283. Another is in Milan, Italy, where a verge clock was built in the Palace of the Visconti in 1335. There are records as early as 1271 that clockmakers were trying to invent an escapement but had yet to be successful. One thing is for sure; there were mechanical clocks that relied on oscillations in the late 13th century.

Accuracy Was A Problem

The accuracy of the first verge and foliot clocks was not good – accuracy was measured in hours per day. Today, a clock with similar construction has an accuracy of minutes per day with careful design and maintenance. Early verge clocks were probably no more accurate than water clocks, but they did not freeze in winter, so they were seen as a significant improvement.

It was not until the advances in mechanics in the 1800s that resulted in the adoption of the pendulum that clocks really started to become accurate. Since clocks were valuable, after the invention of the pendulum, many verge clocks were rebuilt to use this more accurate timekeeping technology, so very few of the early verge and foliot clocks survive unaltered.

It Is All About The Oscillation

As the technology and understanding increased, many different escapements were developed, including the horizontal or cylinder escapement, the duplex escapement, the chronometer, or the detached escapement, to name but a few.  The key aspect of all of these is that ultimately the accuracy of each of these mechanisms is determined by the regularity of whatever is oscillating.  The development of the balance wheel drove the accuracy of clocks and watches.

The Arbiter of Accuracy

This addition of a spring to moderate the movement of the foliot, and the development of the foliot into the balance wheel was transformational and improved the accuracy of timekeeping equipment immensely. The addition of the spring allowed the balance wheel and spring system to be adjusted so that the spring and wheel could oscillate at its harmonic frequency – or in today’s modern speak, isochronous.

The biggest improvement came around 1657 when Robert Hooke, of Hooke’s Law fame and Christiaan Huygens, became involved.  It is still debated who was the real inventor of the balance wheel as we know it today, but for certain, both contributed to turning early pocket watches from expensive novelties to useful instruments.

Since then, the balance wheel, balance spring, and escapement have remained unchanged in principle.  What has changed, though, are the physical layout, the materials used, and the geometry of the various components.  Now those changes will take another few blogs to understand.

If you are enjoying reading these blogs please do leave us a comment below.  We do enjoy receiving your feedback.

Read More →
PrevPreviousSNGLRTY Can Be Viewed at FRERET-ROY, Watches & Wonders
NextThe Energy In A Spring – A Watchmakers GuideNext