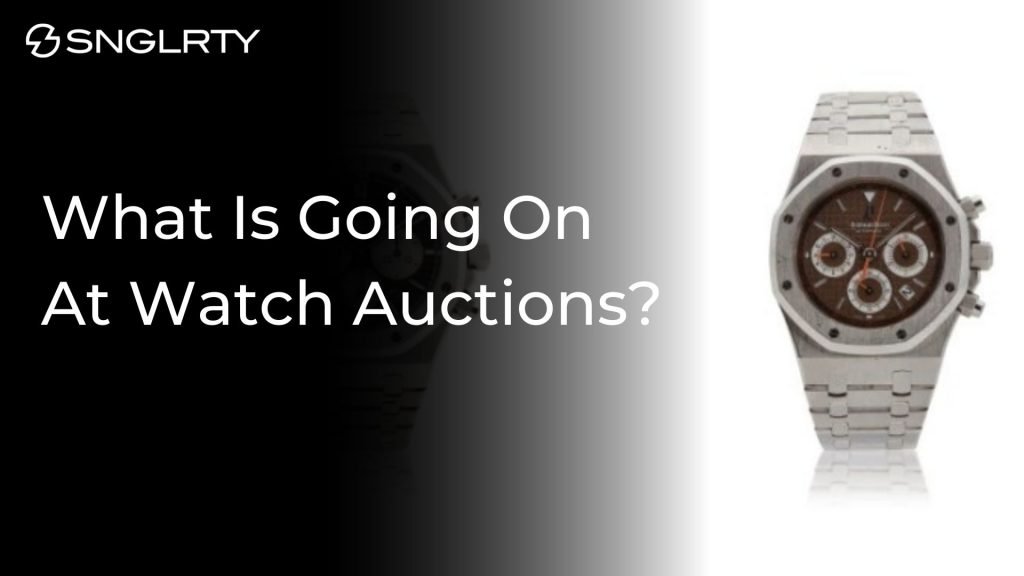 Watch auctions have been something I have written about a couple of times over the last year.  These blogs were thrilling because of the almost incredible prices paid for relatively readily available watches. But there was a deeper reason, and I felt I needed to write about these classic watch auctions because there was a complex story behind each watch.

It Is The Story That Counts

These watches were not the rarest of watches, but it is the story behind the watch that drives the price paid at an auction to the sky. In January 2021, I started to look at this trend in more detail. The iconic watch auction served up a watch worn by Steve McQueen, one of the most famous actors of the time.

This trend of the story behind the watch creating value at auction continued this year.  Two Patek Philippe watches created a stir in the auction world when they broke records.  In this case, there was both rarity and a great story behind each of the watches in question, even if, in one example, the scarcity was somewhat contrived.

Let’s Look Under The Hood

These are the pinnacle of the watch auction world, but I thought it would be interesting to look a little lower down and see how robust the watch auction market is when you “peek under the hood” as it where.  There are watch auctions around the world almost weekly, the likes of Sotheby’s and Christie’s have regular auctions in London, Paris, New York, and Hong Kong, to name just a few.  There are also many specialist watch auctioneers too.

I decided to look at three auctions that occurred over the last three months and try and gauge the health of the watch auction market or, to put it another way, see what is going on in the rarefied world of watch collecting.  How strong is demand out there, and are the premiums paid for new watches still evident in the auction market?

What Is The Goal?

Before we delve into the details, I should clarify a few points. The first is that this review is not intended to be a scientific analysis of the state of the watch auction market. I am just looking to gauge the health of the market overall.  I will select a few bellwether watches and use them as a benchmark for the sentiment in the market.

Narrow Down The Field

Finally, it would not be possible for me to track all the watches auctioned, especially given the large number of brands represented at each auction. Hence, as our gauge, I decided to select three specific brands, and from those three particular brands, a single watch from each brand would be well represented in each auction.

I did not attempt to distinguish between specific executions of each watch.  Many of the watches for sale in Hong Kong incorporated a lot of precious metal and diamonds, and those in New York were more classic.  What I did to remove the variation from this variable was to look at the relative performance of the auction hammer price versus the median guide price and the high guide price of these watches.  This, I believe, will provide a good indication of the relative performance of these watches at auction.

Twelve 12 Audemars Piguet Royal Oak watches sold over the three auctions at a premium over the median estimated auction hammer price of 65%.  Seven of the watches exceeded their high estimated hammer price, with two exceeding the high by over 100%!

The best performing watch was the cheapest one in the auction, a Nautilus Ref. 4700 that was estimated to have a high hammer price of US$4,480, but when the hammer eventually came down, the buyer paid US$10,584.  A remarkable performance.

What Is The Market Telling Us?

What is clear from looking at these numbers is that there remains a lot of demand for these classic watches at auction.  The auction houses are indicating price ranges that are consistently beaten would indicate an extremely strong watch auction market.

If we look at the sales of these 26 watches over the last three months, I think it is safe to conclude that the watch market is in fine fettle.  Prices are buoyant, and there is keen interest in these well-followed watches across the globe.  Our resident watch collector, The Watch Whisperer, tells us that watches, classic cars, and share prices all tend to move together, so perhaps it is time to buy a few more shares too? (NOT financial advice!)

Just tracking how long we have been writing about these watch auctions, our first blog on watch auctions was in October 2020. This incredible market has been going from strength to strength since then.  The question is, how much longer can this go on?

Looking For The Opportunity

Time will tell, but I will be following it more carefully.  My hunch is that what goes up must come down, so sometime over the next few years, and there will be the opportunity to buy a watch or two I have hankered after for years at an excellent price.  I don’t particularly appreciate overpaying for my watches, so I am prepared to be patient.