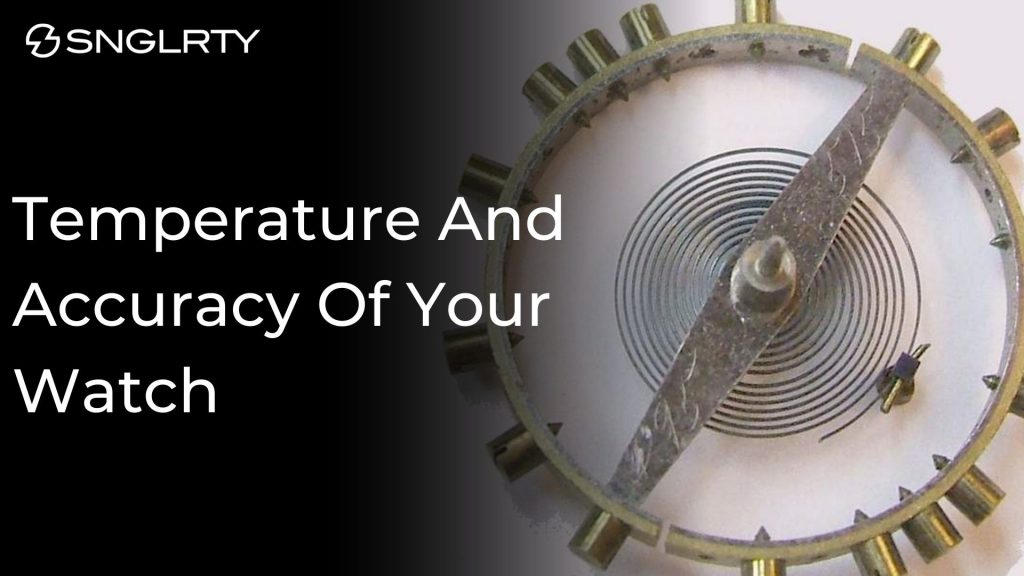 The Accuracy Of Your Watch And Temperature

Temperature and accuracy may not be something you would immediately think of when considering the purchase of your next watch?  Believe it or not, it has a significant impact on the accuracy of your watch.  Which part of the watch movement is most susceptible to temperature?  Would it be a surprise if I said it was the balance wheel and balance spring?  After all, this is the heart of the watch movement and the arbiter of accuracy for your watch.

The balance spring has come under much scrutiny in this blog over the last few weeks.  We have looked at its history and many of its physical properties, including how we would calculate the energy in the spring and understand the dynamics of the balance wheel it is attached to.  This is all to answer how a watchmaker would design an isochronous balance wheel and balance spring system.

Over the years, various materials have been used to address these problems.  Understanding the application of these materials over time can give us a great insight into modern technology, but first of all, let’s look at the fundamental problem in more detail.

Robert Hooke and Christian Huygens, who are credited with developing the modern watch escapement, independently observed the issue of temperature on the watch movement but could not find a solution to it.  What was needed was a fundamental understanding of what happens to the metal when the temperature changes.

As the temperature changes, the physical properties of materials change, in some cases quite materially (pun intended).  In the early days of watchmaking, springs and balance wheels were made from steel, so we will use this as our example.  When steel, or any material, is heated, it expands.  This expansion also changes the material’s modulus of elasticity; this is a measure of its springiness.  I have written about this in detail in a previous blog.  As a quick refresher, when a force is applied to any material, it stretches.  The modulus of elasticity is the ratio between the force applied per unit of area on a material and the amount the material will stretch with the applied force.

This modulus of elasticity is defined at a specific temperature.  But temperature also impacts the physical properties of any material, and here we have the coefficient of thermal expansion.  This measures the expansion of material for each degree increase in temperature.  You may think these changes are pretty small, so the effect is negligible.  Alas, not.

Again, let’s think about a watch and the cycles it can go through in its lifetime.  In colder climates, it can drop below zero centigrade quite easily.  Yet, your watch could be exposed to 40 plus degrees or more in tropical climates, and your wrist is typically at around 37 degrees centigrade.  These are not immaterial changes.

This is a similar problem faced by the makers of quartz movements, too; the solution is reasonably straightforward for a quartz movement.  Alas, there is no simple solution for mechanical movements.  The first line of defense for temperature fluctuations is to have a well-designed watch case.  Yes, the watch case is there to make your watch look great, but it also has some practical purposes other than holding all the bits together.  The watch case is the first line of defense to sudden and significant temperature movements.  Having the watch close to your wrist also means a large and constant mass keeps the watch case at a constant temperature.  But what to do about those variations if the watch is off your wrist?

We know that when the temperature increases the balance spring loses spring and when it is cooler, it becomes more springy.  This compensation method changes the geometry of the balance wheel rather than adjusting the spring.  As we looked at in a previous blog, the moment of inertia is a function of the radius squared.

The Quest For Accuracy

In the quest for greater accuracy,severalf different materials have been used for balance springs.  Steel was used initially, but these springs would weaken over time without any hardening or tempering and the watch would start losing time.

Some watchmakers experimented with gold balance springs.  Gold avoids the problem of corrosion but is even more susceptible to weakening as it is such a soft metal.  John Harrison first used hardened and tempered steel for the balance spring, which became the material of choice until the 20th century.

As far back as 1833, E. J. Dent experimented with a glass balance spring.  Glass has a much lower coefficient of thermal expansion, thus reducing the compensation required, it also has the added advantage that it did not rust.  The problem was that glass springs were complicated and expensive to make and were perceived as fragile.  This image persisted until the advent of fiberglass and fiber-optic materials.  In the late 20th-century, silicon balance springs were introduced (silicon is just another name for glass!).  These addressed several problems, including a low thermal coefficient so required less adjustment, would not corrode under any circumstances and was also unaffected by magnetism.

The compensation balance effectively compensates for temperature fluctuations on the balance wheel and the balance spring to maintain accuracy.  Still, a further challenge remains that this cannot be a complete solution.

The ultimate solution was developed by a material scientist around 1900.  This was a fundamentally different solution to the problem – it is called Elinvar.  Developed by Charles Édouard Guillaume, Elinvar is a nickel-steel alloy whose modulus of elasticity is unaffected by temperature within the normal working range of a watch.  Thus if a watch is fitted with an Elinvar balance spring, it does not require any temperature compensation and eradicating the middle-temperature error.  Since then further improvements have been made and various names are used for commercially available balance spring materials.

So now you know, when you are looking at all these extraordinary materials used to make watch balance springs, the reason is to do with the temperature and the effect that temperature has on the performance of various materials.